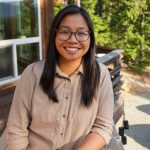 Tamthy Le, Director of Operations and Government Grant Relations
Tamthy Le is the youngest daughter of two Vietnamese refugees who love to rhumba. She was born and raised in South Seattle and later attended the University of Washington where she received a Bachelor of Arts in Social Welfare with a Minor in Diversity. She began at Kandelia in 2014 as a case manager and currently serves as the Director of Operations. She is a big fan of the Mariners, Ezell’s fried chicken, and spending time with her cat Benedict and wife in their home in Columbia City.
Fun fact: At 5’ 3”, Tamthy is the tallest person in her family. 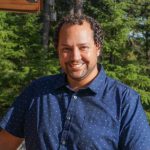 Baeda Agonafer, Senior Program Manager
Baeda is an alumni of Eastern Mennonite University where he graduated with a BA in Psychology. Baeda has a long history of working with organizations that focus on youth development, and social justice. Baeda previously served as Kandelia’s Volunteer Coordinator, working to emphasize the importance of supporting our growing community.
Fun Fact: Baeda rescued two cats from the streets of Seoul, they now have kitty passports and Instagram account. Can you find them?! 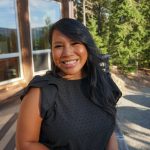 Sieng Douangdala, Community Engagement Manager
Sieng is a creative connector, whose background informs her personal investment in servant leadership and fostering social change. Sieng’s lived experiences as a refugee from Laos helps her serve a variety of cultures. Her experiences includes: program management; wraparound services; and development and implementation of programs focused on equity, diversity, and inclusion. Sieng’s work is rooted and driven by inclusivity, humility, collaboration, and commitment to healing our communities.
Fun Fact: Sieng has two girls and loves spending time outdoors. 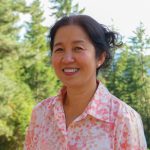 Thu Le, Family Engagement Manager
Thu Le came to the U.S. 25 years ago with her husband and daughter as refugees. Before that, she was an elementary teacher in Vietnam for 10 years. She began working with Kandelia in 2014 as the Cultural Navigator and is currently the Family Engagement Manager. She loves gardening, sewing, traveling, and watching the Big Bang Theory.
Fun fact: Thu is the oldest sister of her five siblings. 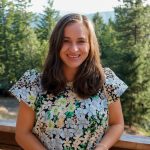 Aissa Perez, Development Manager
Aissa comes from a family of immigrants and has always felt connected to work that values and lifts up immigrant communities. Since graduating from UC Davis with a degree in Sociology and English, she has worked in both programs and development for nonprofits focused on affordable healthcare and breast cancer research and services. She has called Seattle home for the last 3 years and is excited about working for an organization so centered on the community in the city she loves so much.
Fun fact: Aissa has a cat named Whopper with whom she is only mildly obsessed. 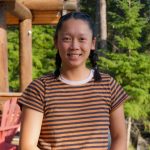 Kristie Wong, Youth Program Manager
Kristie has a Masters in Public Health from the City University of New York. She has worked with youth for over seven years, primarily in communities of color. Kristie brings her knowledge of nutrition and public health to support the basic needs of students and their families.
Fun Fact: Kristie has four chickens who like to eat her vegetable garden. 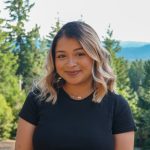 Cielo Martinez, Youth Program Coordinator
Born and raised  in Guatemala, Cielo moved to Seattle at when she was 14 years old. She started high school at Seattle World School and graduated in 2018. Cielo just received her AA transfer degree to UW Bothell where she’ll be studying Society Ethics and Human Behavior. Her passion is to help others in the community, especially other students that are new to the country like her.
Fun fact: Cielo is a master makeup artist on the side and also does makeup for fashion shows and lots of photoshoots! 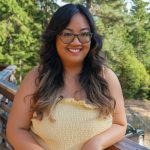 Lorna Nguyen, Admin and Finance Coordinator
Lorna is a Seattle native who graduated from the University of Washington with dual arts degrees in Psychology and Gender, Women, and Sexuality Studies, with a minor in Diversity. Growing up, she was always drawn towards anything that involved artistic self-expression, service to others, and education. This left her with no other choice than to work with the immigrant and refugee community in Seattle, individuals who are much like her parents, who came to Seattle in the early 90s.
Fun Fact: Lorna’s dream when she retires is to own a floral shop that triples as a coffeehouse and community library for those looking to escape city life, even if it is only for a little while. 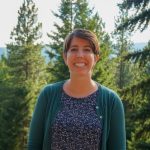 Chandra Rapley, Community Resource Coordinator
Chandra is an empathetic educator who is passionate about empowering youth and families and building healthier, more connected communities. She has spent the past decade working and volunteering in the nonprofit and education fields, serving in a variety of roles from volunteer coordinator, homeless services specialist, bike and pedestrian safety educator, and ESL teacher.   She was born and raised on the central coast of California, graduating from UC Santa Cruz with a Bachelor’s Degree in Sociology. Since then, Chandra has lived and worked in many places, from Montana to Costa Rica, and has found volunteering is her favorite way to connect to her new home and serve the community. She is a newcomer to Seattle, and is looking forward to serving this community and exploring beautiful outdoor areas around the city.
Fun Fact: Chandra has a green belt in judo! 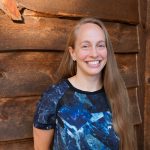 Dakota Spear, Volunteer Coordinator
Dakota grew up in rural Connecticut, and took a roundabout route before arriving in Seattle three years ago. Her experience living and working in several countries, including Costa Rica, Indonesia, the United Kingdom, and five states within the USA, has cemented her desire to always do work that lifts a variety of voices, perspectives, and experiences. She is dedicated to helping build community through service, and has helped coordinate volunteers at several Seattle institutions, including the Pacific Science Center, Woodland Park Zoo, and the Seattle Aquarium.
Fun Fact: In 2017, Dakota hiked the entire Pacific Crest Trail and loves time in the mountains. 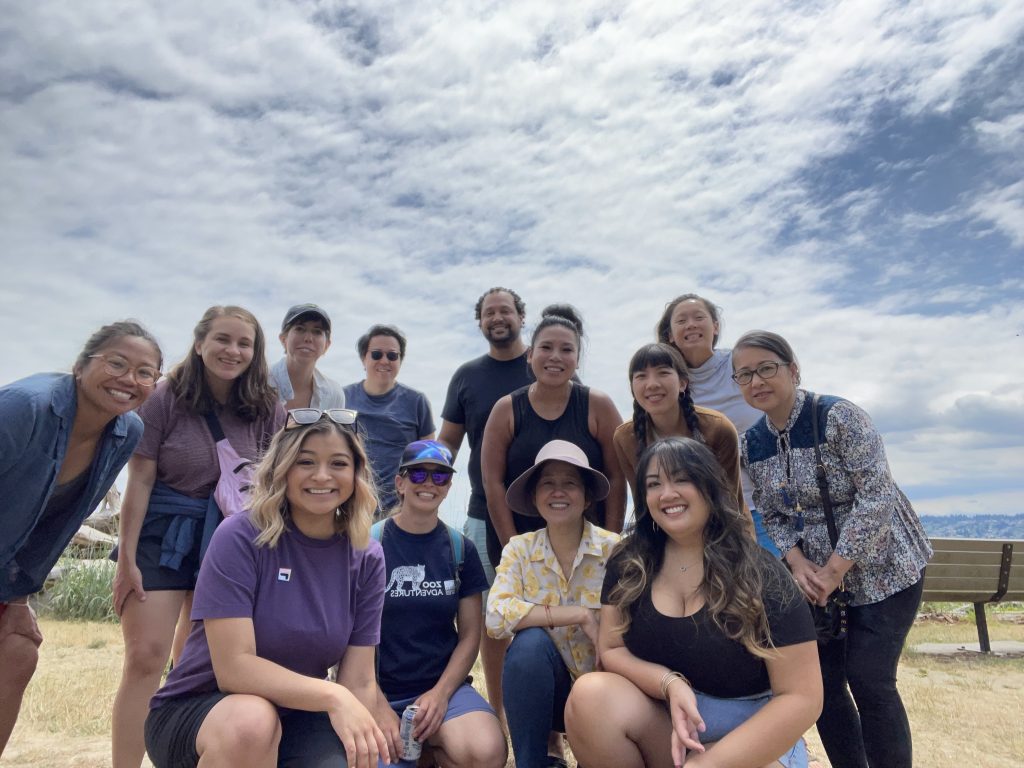 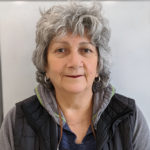 Gayne Sanchez, Family Support
Gayne Sanchez is a former Seattle World School parent. As a mother of two amazing women and one amazing man, she has focused her education and instructional skills on supporting immigrants and newcomers through designing and delivering programs that supports parents to gain the self-confidence to reach their goals. 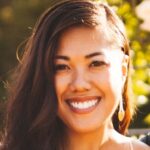 Juliet Le – Co-Chair
A daughter to immigrant and refugee parents, Juliet believes in decolonizing philanthropy, movement building, community organizing, and the arts. She believes in reimaging and building a fully inclusive society where all people are free to be whole, to thrive, and to live with dignity, regardless of income or race. Professionally, she is a Program Officer at the Satterberg Foundation. Prior to joining Satterberg, Juliet worked at Social Venture Partners, Medic One Foundation, and the Institute of Social and Medical Studies (ISMS). She also co-chairs the Seattle chapter’s Asian Americans/Pacific Islanders in Philanthropy (AAPIP) and Emerging Practitioners in Philanthropy (EPIP) and organizes with the Asian Pacific Islanders Cultural Awareness Group (APICAG) at the Monroe Prison in Washington State. 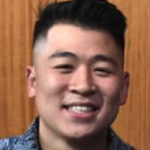 Johnson Nguyen – Co-Chair
Johnson brings over eight years of experience organizing in communities of color to his role on the board. As a first-generation immigrant from Vietnam, Kandelia’s mission and vision deeply resonate with him. He benefitted first-hand from Kandelia’s services while studying at the University of Washington. Johnson currently works as a planner for King County and is the proud parent of two (mostly) adorable kitties. 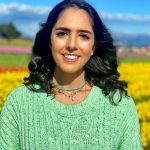 Alisar El Rayess
Alisar is half Mexican and half Lebanese and a first-generation immigrant. Her life purpose is to positively impact the lives of people; to move people out of environments of suffering and into environments of joy, particularly children. She has 6+ years of experience in human rights project management in international domestic settings. Alisar is a UC San Diego alumni where she graduated with a Master’s in International Affairs. Fun Fact: Alisar spends her free time hiking around the PNW and just climbed Camp Muir this past spring! 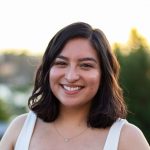 Maria Jimenez-Zepeda
Maria is the proud daughter of Mexican parents and has spent her life living and working with immigrant communities. Professionally, Maria brings her policy and project management experience to help create equitable conditions that allow individuals and families to thrive. In her personal time, Maria serves on the Seattle Immigrant and Refugee Commission and is a partner of the Education Collective Action Team at Social Venture Partners. 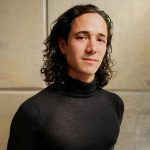 Diego Gonzalez-Medina
Diego is a Chicano & Puerto Rican analytics professional, with accomplishments in epidemiological research, health systems consulting, racial disparity assessment, and marketing analytics. He is excited to join Kandelia’s board where he can marry these skills with his experience as a community leader to the benefit of Seattle’s immigrant and refugee families.

Are you passionate about removing barriers to immigrant and refugee success? Board members use their unique skills and life experiences to help guide our organization to make an impact. Contact us to learn more about opportunities to join our board.

“From my personal experience, it was really hard to get my job. I had to practice a lot before coming in to my interview. One thing I liked the most about this program was that we basically did this mock interview, or practice interview. It was something that helped me get more confident. I would say that it helped me a lot with getting my first job.“

Your support can make all the difference

This website uses cookies to improve your experience while you navigate through the website. Out of these cookies, the cookies that are categorized as necessary are stored on your browser as they are essential for the working of basic functionalities of the website. We also use third-party cookies that help us analyze and understand how you use this website. These cookies will be stored in your browser only with your consent. You also have the option to opt-out of these cookies. But opting out of some of these cookies may have an effect on your browsing experience.
Necessary Always Enabled
Necessary cookies are absolutely essential for the website to function properly. This category only includes cookies that ensures basic functionalities and security features of the website. These cookies do not store any personal information.
Non-necessary
Any cookies that may not be particularly necessary for the website to function and is used specifically to collect user personal data via analytics, ads, other embedded contents are termed as non-necessary cookies. It is mandatory to procure user consent prior to running these cookies on your website.
SAVE & ACCEPT